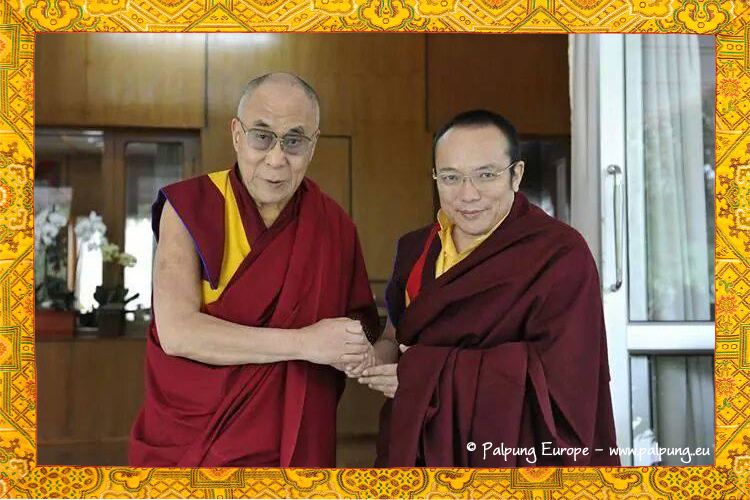 In th 8th century A. C., King Trisong Detsen invited the Indian scholar Santaraksita to Tibet to teach Buddhist philosophy. This Indian started with the construction of the first monastery in Tibet, Samye. But due to many obstacles he couldn’t succeed. Therefore the great tantric master Padmasambhava, great scholar and abbot of Nalanda university, was invited to conclude the construction. It was the time when the first men were ordained as monks.

From then on the Tibetan history is closely intertwined with the sacred dharma, the transmissions of Buddha Shakyamuni’s lineage. The spreading of this lineage went through times of blossoming, decay and its persecution, followed by its slow reintroduction. Tibet emerges as the land of the spreading of the pure teachings.

Saying this we need to know that we are actually dealing with eight practice lineages (Nyingma, Kadampa, Lamdre, Zhije, Marpa Kagyu, Shangpa Kagyu, Jordrug, Dorje Sum gyi Nyendrub) and ten academic lineages, which were institutionalized into four. These are Nyingma, Kagyu, Sakya and Gelug. Rime is not a lineage, rather the communal effort of mainly Jamgon Kongtrul Lodro Thaye, Jamyang Khyentse Wangpo, Chogyur Dechen Lingpa and Tai Situ Pema Nyingje Wangpo to revive, renew, cherish and uphold and foster all lineages equally.

H. H. Dalai Lama is the Supreme Head of all Tibetan Buddhists.

excerpted from “The Himalayas and Beyond”