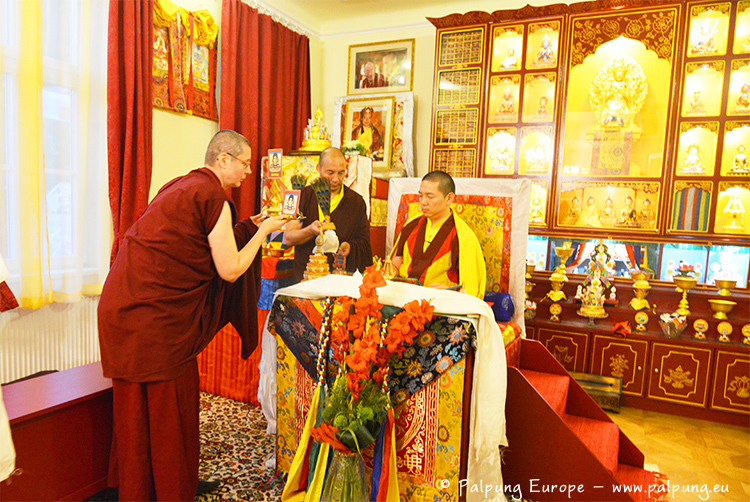 While within Tibetan Buddhism male monastics can upgrade their vows into the full ordination of a gelong (tibetan, sanskrit: biskhu), following the Mulasarvastavadin lineage observing 253 vows, this type of ordination never reached Tibet for women.

In the 1960s, The 16th Gyalwa Karmapa approached The 14th Dalai Lama on the subject, finding strong support by His Holiness to fulfill nuns’ aspirations. Succeedingly, the first nuns were sent to receive the vows within the Mahayana Buddhism, where the Dharmagupta lineage had been kept unbrokenly since the time of Buddha Shakyamuni with 348 vows to observe, mostly to Taiwan and Hongkong.

“[…] There are already nuns within the Tibetan tradition who have received the full Bhikshuni vow according to the Dharmagupta lineage and whom we recognize as fully ordained. One thing we could do is to translate the three primary monastic activities (Posadha, Varsa, Pravarana) from the Dharmagupta lineage into Tibetan and encourage the Tibetan Bhikshunis to do these practices as a Bhikshuni Sangha, immediately. […]” The Buddhist Bhikshu Tenzin Gyatso, The Dalai Lama

“Many people might think I’m doing this because others want me to. But I’m not doing it to placate anyone or in response to anyone. No matter how others see it, I feel this is something necessary. In order to uphold the Buddhist teachings it is necessary to have the fourfold community (fully ordained monks (gelongs), fully ordained nuns (gelongmas), and both male and female lay precept holders). As the Buddha said, the fourfold community are the four pillars of the Buddhist teachings. This is the reason why I’m taking interest in this.” (H. H. The 17th Gyalwang Karmapa, Orgyen Thrinley Dorje, January 2015)