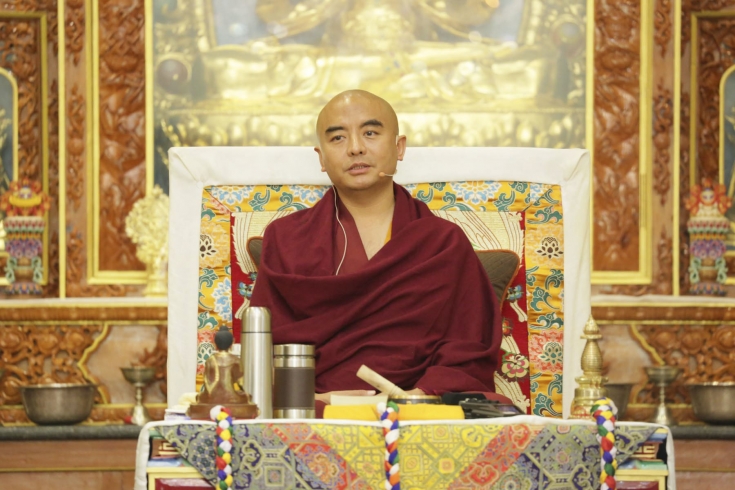 Mingyur Rinpoche is one of the tulkus of Palpung Sherabling Monastic Seat. He is an emanation of Vajrapani. During the time of Buddha Shakyamuni he was one of the main students Magapa who lived in Bodhgaya. Afterwards there appeared many incarnations in India. In Tibet he was the oldest son of King Trisong Detsen, Mutri Tsenpo, disciple of Guru Rinpoche.

The seventh Mingyur Rinpoche, Karma Gyurme Tenzin Chokyi Dorje, was born in Nepal near the Tibetan border in Nubri as son of Urgyen Tulku Rinpoche. At the age of thre years he was recognised by The16th Gyalwang Karmapa as the reincarnation of Yonge Mingyur Dorje Rinpoche. Additionally, he was recognised as the incarnation of Kangyur Rinpoche, a Nyingma master by Khyentse Rinpoche. As a small child, Rinpoche decided himself to devote his current life to serving the Kagyu lineage. At the age of eleven he came to Palpung Sherab Ling where he was enthroned by The Chamgon Tai Situ Rinpoche, continuing with his studies and meditation. At the age of thirteen he entered the traditional three-year retreat in Sherab Ling. At eighteen he was appointed retreat master by Tai Situ Rinpoche of both the nuns’ and monks’ retreat. Besides he studied at the shedra and sucessively started to teach at the shedra himself. In 2000 he started the construction of Tergar Institute in Bodhgaya, India, which was opened in November 2006 with The Gyalwang Karmapa attending who consecrating it and of Ösal Ling near Kathmandu, Nepal. Most time of the year Rinpoche currently spends travelling and teaching throughout the world. Rinpoche founded Tergar international, is author of the book “The Joy of Living“, Joyful Wisdom, In Love with the world, and so much more.

In early June, 2011, Mingyur Rinpoche walked out of his monastery in Bodhgaya, and began a “wandering retreat” through the Himalayas and the plains of India that lasted four and a half years. When not attending to his monasteries, Rinpoche spends time each year traveling and teaching worldwide.

excerpted from The Himalayas and Beyond

How to get to us
in Purkersdorf