Prophecies in various Sutras and Tantras 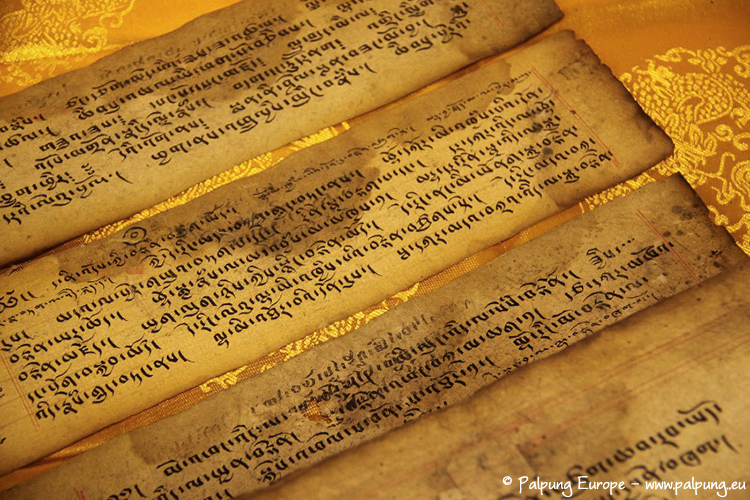 The lineage of Karmapas was predicted in many of Buddha Shakyamuni’s Sutras and Tantras as well as in the Terma teachings of Guru Rinpoche.

In the Towo Namgya Barway Dolle Tantra Buddha predicted that an individual bearing the name of Karmapa would appear possessing tremendous outstanding qualities and capacities to benefit living beings.

In the Jampal Tsagyu Tantra, it was asserted that an individual would come who would develop the teachings of the victorious ones and cause them to flourish. It was further indicated that his name would begin with the sound „Ga“ and end with the sound „Ma.“

Similarly, in the Samadhi Raja Sutra the Buddha foretold that two thousand years after he passed into nirvana, Buddhism would spread in the snowy country of Tibet and all the people would become devoted to Avalokiteshvara. At this crucial moment in the development of Buddhism, when the country as a whole was beginning to practice the teachings of Chenrazig, a Bodhisattva would come who would be as powerful as the lion’s roar, and he would bear the name Karmapa. It was also foretold in this sutra that because of his outstanding qualities, beings could be liberated simply by hearing, seeing, or thinking of the Karmapa.

In another sutra, called Do Lang Kar Shegpa, a disciple asked who would wear the Black Hat in the future, and in which country he would benefit beings. The answer was that in the northern direction there would be a powerful, extremely knowledgeable and wise being named Gyalwa Pel who would reincarnate in the future bearing the name of Dusum Khyenpa, the Knower of the Three Times. When the disciples then asked for how many incarnations this being would emanate and how long Karmapa’s teaching would last, the Buddha replied that Karmapa would continue to incarnate throughout the time of the thousand Buddhas that have yet to come, and predicted that the Buddha activity and emanations of His Holiness the Karmapa would be ceaseless. Additionally Buddha Shakyamuni let it be known that all hinderances of the previous seven lifetimes of individuals who have had the opportunity to meet him, would by having simply done this, be purified. When Ananda asked the Buddha when and how the Black Hat would originate he then answered that in ancient times, before Sakyamuni Buddha himself, there had appeared a Buddha whose name was Marmeze. Uncountable kalpas before Sakyamuni Buddha, the Buddha Marmeze had appeared on the earth and in uncountable kalpas before Marmeze, there had been a great enlightened being called Buddha Dayong Kegyalpo. During the time of the Buddha Dayong Kegyalpo, there was a powerful king who had a younger son whose name was Chuche Lodu. Prince Chuche Lodu went to a northern site on top of a mountain and meditated there for a hundred million years. Having meditated there a hundred million years, he obtained the name Tasung Khompake.

The dakinis of the ten directions were completely inspired by Tasung Kohmpake’s tremendous capacity to observe samadhi for such a long time, so they gathered from the ten directions – thirteen million dakinis in all. Each dakini offered one strand of her hair, and as a gesture of inspiration and respect they wove a black hat with these thirteen million strands of hair. The black hat was also ornamented with precious jewels and then offered to this great being, Tasung Kohmpake.

In the Dodupa Sutra, it was explained that in the hundred million realms, a hundred million Karmapas will reincarnate. And similar to the predictions by Guru Padmasambava it was prophesied that an individual bearing the name of Upasaka Gyawa Pelwa, (which means „one who increases virtue“), would arise possessing tremendous miraculous powers, insight, wisdom and magnetizing energy. He would benefit all beings of the higher level as well as ordinary beings such as householders. Upasaka Gyawa Pelwa would also expound the sacred teachings and cause uncountable beings to follow the virtuous path of the Dharma. And not only would they follow the path of the Dharma, but through his blessing and kindness they would be able to perfect this path.