I’ve been quite unwell for a long time with ongoingly decreasing strength. Even a telephone call would exhaust me and should have had me rest a whole day, let alone doing anything else. Needless to say, I did not stop to work, trying to finish up all projects I had started. I felt, I was nearing the end.  It’s been building up for many years, my mind also not functioning in the way I am used to. This spring, again, I was sick, taking antibiotics for 2 months without break, and my physical strength was reduced to zero. At that time, our Precious Lord called me on few occasions, giving advice, bestowing blessings.

Once Corona with all its restrictions made it possible, I went up to our retreat center to continue with buildup, getting weaker and weaker. So weak I would tremble lifting my hands in prayer. So the Loving Protector, my only refuge, was contacted. He called me and bestowed instructions and blessings. Then our GP near our retreat center was caught on the plan and started me on never ending tests of just any kind to find out why one very strange parameter was standing out but not leading to any clear direction. She sent me to more specialists, receiving no satisfactory results.

September 12th, late evening, we received a call from our very distressed GP, telling us that she had just received the results from a MRT done in the morning and that I was a death candidate with cancer and was to be submitted to hospital straight away to receive emergency surgery.

I contacted my Guru Vajradhara immediately and upon having received the news, he called me straight away, giving advice, bestowing blessings. Only recently had I put all necessary info together in a 7 page state of affairs for my monastery that I had sent to my exalted Guru’s administration and himself, too, to make sure a smooth transition were to be happening if the worst were to come true. That was before I received our GP’s news. Upon her call, I wrote some last instructions, handed out a letter of attorney to one person and went to hospital. 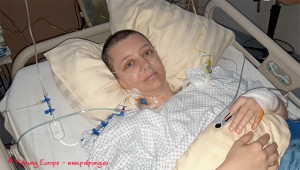 From then on, everything kept changing constantly.

The next thing I learnt was that the cancer was so huge, it needed chemo before surgery was feasible. Then, I was told that all organs in the area were infested and were to be removed, too. Since different diagnostic procedures produced no distinct clue, the surgeon decided to go in “blindly” and to deal with whatever to be found. Again, I had to sign a letter of attorney to the surgeon to be allowed to remove whatever needed removal. The surgery was executed Thursday by the chief of the department who only takes on the difficult cases, taking four hours. After five big cuts and being responsive again, I was told that the monstrous growth and lymph of the area had been removed, neither had I received the compulsive ileostomy (in harsh contrast to all the forecast), nor were most miraculously, any other organs cut out. I was on a epidural catheter, central venous catheter and loads of other tubes and cables attached to all kinds of machines everywhere, heavily sedated and my only nourishment still was tea and watery soup, strictly measured.

My Sublime Lord holding me, the surgery went well, given I had absolutely no strength before admission. 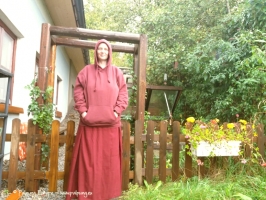 Doing exclusively everything in a mind over matter attitude, my stubbornness superseding just anything, ususally no one sees how I am really doing since if I’m in it, I’m in, come what may. But now, I had to give in to a bunch of malign cells that had produced quite a beast, never wavering in spirit, living by the moment very freely.

I was released from hospital after 11 days to gain strength in order to return for a planned series of new tests and for the implantation of a port for chemo therapy, October 12th. The port implantation turned out to be a difficult undertaking, causing a pneumothorax which had me be on a lung cathether for days, sucking out both air and liquids for my lungs to fully unfold again. That of course had all other tests be postponed. Again, I contacted our Exalted Guru who wanted to be informed regularly. And yet again, he blessed me day and night so that the cathether was finally removed after six days and multiple X-rays and CTs daily, to continue with scheduled tests and am about to receive my first chemo.

Our Beloved Lord, the Living Buddha had been holding me very closely to his heart right from the start, blessing me day and night together with Gegenla. I am sure I would have died without him.

Relying on an authentic guru is the only valuable in this sphere of fast changing phenomena. He is the only one able to lead us through transition, exclusively if our connection is pure and authentically based on practice and sacred commitment, respect and genuine love. Merely having met such an extraordinary being does not suffice.

We must put in effort through our own heartfelt practice to make this connection become alive and functioning! A shallow coffee and cake relationship won’t get us anywhere!

May all sentient beings find such a genuine guide through the jungle of bewilderments. I will remain at the holy feet of my Sublime Lord until Samsara will be freed.

Photos: from top to bottom: