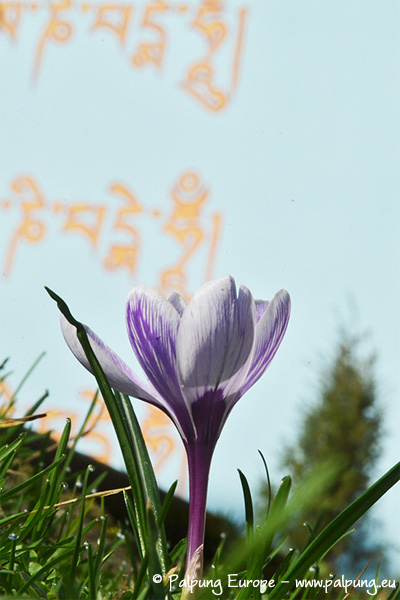 Having received the formal refuge in a ceremony by a master of an unbroken lineage, the aspirant becomes part of the lineage of blessings of Buddha Shakyamuni. Hence a new name, the so-called refuge name is received which is not used in daily life but in various religious ceremonies. From now on, one is Buddhist and receives particular instructions for spiritual practice and individual maturation from the refuge teacher, practices prayers and different ways of meditation on basis of the right view and the right conduct, the Four Noble Truths and the Noble Eightfold Path, forming the coare of all three main vehickles of the Buddhadharma’s path.

Basically and simply speaking, we can distinguish between lay practitioners and monastics.

Lay practitioners continue with their regular life and put effort into continuing their lifes according to Buddhist ethics. They practice within one of the three vehicles. There is possibility to upgrade their vows into the so-called lay precepts.

Monastic practitioners are those who either received the ordination of initial (Tibetan getsul/ma) or full ordination (Tib. gelong/ma, sanskrit: bikshu/bikshuni), living accordingly. While those ordained who hold the intial vows follow 36 rules, Gelongs (male fully ordained) follow more than 250 rules and Gelongmas (female fully ordained) little less than 350 rules. They also practice within one of the three vehicles.

Refuge precepts: can be received by both lay practitioners and monastics. They form the basis for any kind of spiritual practice within Buddhism.

Lay precepts: five in number, for lay practitioners as indicated by the name

Precepts for one day: for both lay practitioners and monastics

Bodhisattva vows: for both lay practitioners and monastics. They are vows of the Mahayana.

Vajrayana committments: for both lay practitioners and monastics.